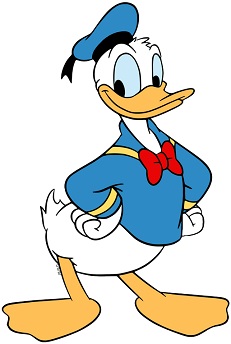 Donald Duck is a famous American cartoon character from the Walt Disney Company. He is a white anthropomorphic duck who usually wears a marine outfit. His main character traits are his loss of temper and his unluckiness.

In the film 200 Motels (1971) during Cal Schenkel's animation sequence for Dental Hygiene Dilemma and Does This Kind Of Life Look Interesting To You? Donald Duck makes three cameo appearances. At the start of the cartoon he walks into a dentists' office where he starts a lecture about dental hygiene. Later Jeff Simmons' head transforms into Donald's head and at the end of the cartoon we see Donald swallowing the entire cartoon and grinning in delight.