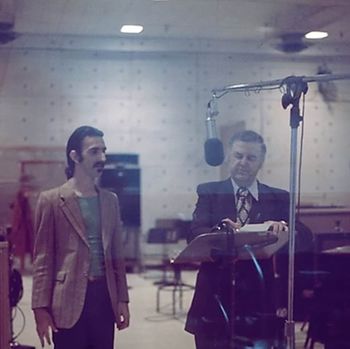 When Frank appeared as guest-host & musical guest on Saturday Night Live in 1976, he had I'm The Slime in the set-list - a song that calls for an 'announcer type' voice. Frank expanded the part to include the 3rd verse that preceded the "Don't touch that dial!" line. Zappa must have been pleased with the result, as he had Don reprise that role for the NYC Palladium run later that month. Don Pardo provided vocal announcements for the albums Zappa In New York and Läther, most memorably during Punky's Whips, I'm The Slime and Legend Of The Illinois Enema Bandit.