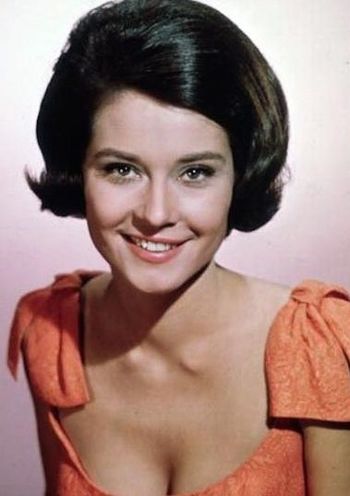 Diane Baker, (February 25, 1938) is an American film actress, and sex symbol. Her well-scrubbed, all-American beauty has frequently been employed as a cool veneer for film characters of smoldering passions.

At age 18, Baker was one of hundreds of entrants (and eventually one of the six finalists) in the prestigious annual Rheingold Beer contest, in the Beverly Hills Hotel, Los Angeles; one of the judges for the contest was Ida Lupino (FZ's favorite actress). Baker - daughter of actress Dorothy Harrington - despite having been born and raised in Hollywood, studied acting in New York with Charles Conrad, and ballet with Nina Fonaroff. She continued her training in Los Angeles at the Estelle Harman Workshop, and quickly secured a contract with Twentieth Century Fox.

Baker was tapped for her first film role as Millie Perkins' sister (Margot) in 20th Century-Fox's "The Diary of Anne Frank" (1959, directed by George Stevens Sr.); Otto Frank was moved to tears over how very much Diane resembled his daughter. 20th Century-Fox then cast Diane as Pat Boone's "girl back home", who didn't get to go along on Boone's "Journey to the Center of the Earth" (1959). Her most famous screen assignment was at Columbia, where she portrayed axe murderess Joan Crawford's supposedly well-balanced daughter in "Straitjacket" (1963); a year later she contributed to "Marnie", directed by Alfred Hitchcock.

In 1966 she appeared in episode # 8.23 of "Bonanza", called "A Woman in the House". Baker became a documentary director in the 1970s with the self-financed "Ashanya" (which dealt with the end of feudalism in India), and a producer with "Second Star to the Right", a.k.a. "Never Never Land" (1982). The best of Diane Baker's latter-day roles was the media-savvy politico mother of the kidnap victim in "Silence of the Lambs" (1991, Jonathan Demme); she also appeared in the follow-up "Hannibal" (2001).

Zappa mentioned Diane Baker in the list of influences inside the sleeve of "Freak Out!" (1966), under the heading: "These People Have Contributed Materially In Many Ways To Make Our Music What It Is. Please Do Not Hold It Against Them".