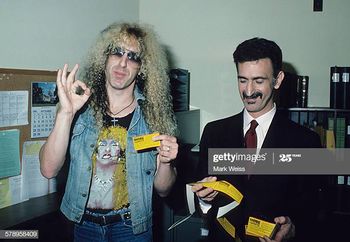 Together with Frank Zappa, Jello Biafra and John Denver, Snider was one of only a handful musicians who dared to oppose the PMRC's music censorship plans. In 1985 he joined Zappa and John Denver in testifying against a record rating system before the U.S. Senate committee on Commerce, Science, and Transportation. [1] [2]