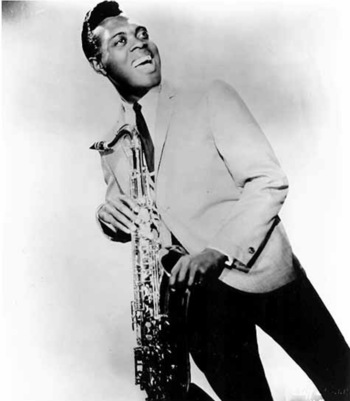 Big Jay McNeely (born Cecil James McNeely, 29 April 1927 - 16 September 2018) was an American tenor saxophone player. Inspired by artists like Lester Young and Johnny Otis, he played in a very flamboyant and expressive way, nicknamed "honking". McNeely dressed eccentric too, with bright coloured suits which seemed to glow when seen in the dark of the stage. He scored various hits in the late 1940s and 1950s, among them his biggest chart success: "The Deacon's Hop" (1949).

McNeely retired from the music industry in 1971 and became a postman. In 1983 he began touring again thanks to renewed interest in his style of music. He passed away in 2018 at the age of 91.

Big Jay McNeely is named in the list of influences inside the sleeve of Freak Out!, under the heading "These People Have Contributed Materially In Many Ways To Make Our Music What It Is. Please Do Not Hold It Against Them".

Musician: Did you see many live rock and roll shows when you were in high school in Southern California?
Frank Zappa: I saw Big Jay McNeely (...).