Lisa Popeil has been a regular back-up vocalist for him.

The cover of his 1983 debut album was a parody of the Over-Nite Sensation album cover. 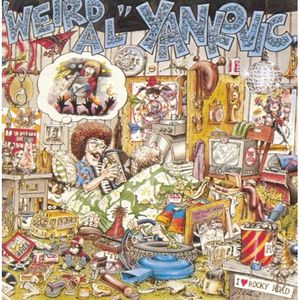 "...back when I had a day job. I was working at the radio-syndication company Westwood One in Culver City, which at the time syndicated the Dr. Demento radio show. It was kind of cool, even though I was basically getting people's lunches and taking out the garbage for them. I got to hang out with DJs, and every once in a while meet some of the rock stars that would come into the building. Frank Zappa was one of them. I got him to sign my tattered copy of Freak Out! He actually knew who I was, which blew my mind, because I had built up a bit of a cult following on Dr. Demento by that time. He said, "Oh, my son Dweezil really likes 'Another One Rides The Bus.'" I think Dweezil was maybe 13 years old at the time. It just blew my mind, because Frank was and still is one of my all-time heroes. And the fact that he knew who this mailroom guy was, was unbelievable to me."

Yankovic wrote Genius In France, a homage to Zappa, for his 11th album Poodle Hat in 2003. The track featured Dweezil Zappa on guitar and vocals.

"While I've never been a big fan of long solos, I've always admired Frank Zappa's compositional acumen, which I studied religiously while writing my Zappa homage, 'Genius in France.' To create my 'style parodies,' I dissect my favorite artists' work and try to step into their shoes and, I hope, create a composition not unlike something they might have done themselves. I felt extra pressure doing that with Zappa; he's one of my all-time heroes and, frankly, I didn't want to screw it up. One reason 'Genius' is nine minutes long is that Frank's style consists of so many components, I felt it would do him a disservice to try to emulate it in three or four minutes. And he'll always have a warm place in my heart for categorically proving to the unwashed masses once and for all that humor really does belong in music."