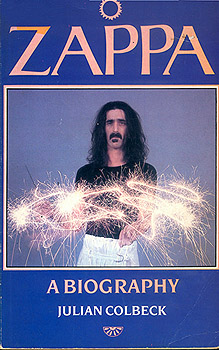 From the book cover:

"I was born in Baltimore, Maryland, 21 December 1941, and grew up in California. I am a self-taught musician, composer, blah, blah, blah. When I was eleven years old I was five-foot-seven with hairy legs, pimples and a moustache," wrote Frank Zappa on the sleeve notes of his first Mothers Of Invention album, Freak Out, in 1966.

Outwardly then, little (except possibly the pimples) has changed in twenty years. In essence Zappa's music hasn't changed much either: the mid-eighties find him just as sardonic, outrageous, provocative -- even obscene -- as ever he was. But today Zappa fires his salvos at humanity from more sophisticated weaponry. His music, once raw and "freaky", is now detailed and carefully constructed, as often as not composed for as symphony orchestra, rather than an electronic rock band.