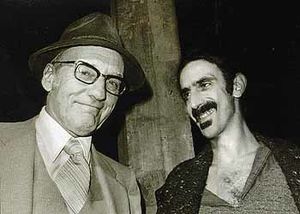 William Seward Burroughs II (February 5, 1914 – August 2, 1997), more commonly known as William S. Burroughs, was an American novelist, essayist, social critic, painter and spoken word performer. Much of Burroughs' work is semi-autobiographical, drawn from his experiences as an opiate addict, a condition that marked the last fifty years of his life. He was a primary member of the Beat Generation, an avant-garde author who affected popular culture as well as literature. In 1984, he was elected to the American Academy and Institute of Arts and Letters.

William S. Burroughs is also mentioned and thanked in the liner notes of The MOFO Project/Object (2006) album. [1]