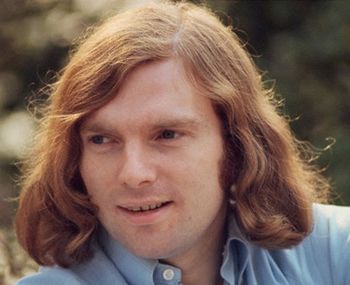 Van Morrison (August 31, 1945) is a Northern-Irish blues/rock singer, guitarist, saxophonist, keyboardist, harmonica player and drummer. He was originally a member of the band Them. Featuring his characteristic growl — a unique mix of throaty folk, blues, Irish, scat, and Celtic influences — Morrison is widely considered one of the most unusual and influential vocalists in the history of rock and roll.

"I liked the group Them, with Van Morrison". - Quoted from Frank Zappa: The SongTalk Interview, by Paul Zollo, Songtalk, Volume 4, issue #1, 1994, Songwriters on Songwriting.

In 1978-1979 Zappa and Van Morrison recorded a single together, Dead Girls Of London, but due to contractual problems they weren't able to release the version sang by Van Morrison. The song eventually ended up on Touch Me There by L. Shankar, produced by Zappa, but with vocals by Zappa and Ike Willis. [1] As Zappa explained himself:

"Oh yes, a classic tale of showbiz stupidity. I was recording Shankar's album and he had written this tune and wanted some words to it. I was sitting in the studio, scribbling some words down when I got this phone call out of nowhere. It was Van Morrison who was shopping for a new label in Europe. I don't know Van very well but I asked him to stop by the studio and see if he'd sing this song. He walked in and took one take: fifteen minutes was all it took. He came in, sang the song and left. We paid him: he accepted the check. The check is cashed, cancelled and so forth. So we go through all the trouble of mixing the record, getting it ready to go and we start hearing from Warner Brothers that they have Van Morrison under contract and there's no way that they'll let his voice appear on a record coming out on Zappa records. There's no way they're going to help me. Well, they're not helping me: the guy's singing on Shankar's album. Warner Bros. was so desperate to harass me that they were injuring third parties, namely Shankar. Also, it's standard in the industry that if a person wants to play on somebody else's record, they do it and there's a little blurb that says so-and-so appears through the courtesy of ... But Warners has no courtesy."

"So negotiations went on and on; for two months I tried to reason with these people. The last straw was when Van Morrison's manager called me up and said he wanted half of the publishing for the song. Do you understand what this means? He doesn't publish it but he wanted half of the publishing on it. Van's manager had the nerve to call up and demand the publishing. I thought about it for a few days, then I called up the president of the company and said, "I'll give him the 50% if he can arrange for Warner Bros. to let it be released." And that didn't work. So we went back into the studio and I sang it."

Interviewer: So Van is still under contract to Warners?

Interviewer: And it was recorded outside the US but for it to be released inside the US ...

Zappa: "Yeah, isn't it sickening? The thing that's really bad about it is that you think of major corporations as being large impartial organizations. They're only interested in moving product. This thing with Warner' Bros. and myself is being conducted on a vindictive, small, personal kind of a level, specifically singling me out and coming right from Mo Ostin, right from the top. It's not an impartial thing; it's pure industrial hatred."

Interviewer: I guess the people on top don't like to be challenged.

Zappa: "Well, too bad! But wouldn't you think they'd have better things to do than make Shankar's life miserable. They don't even know him. They wouldn't even agree to having the vocal on there without Van's name on it. It wasn't that me putting Van's vocal on this song would injure his career. He was happy to have it out; it was a good performance. I don't see how it's infringing on their economic well-being."

- Quoted from Zappa Busy As Ever While Coming Out of Joe's Garage, Record Review, interviewed by Michael Davis, February 1980.