Under The Same Moon 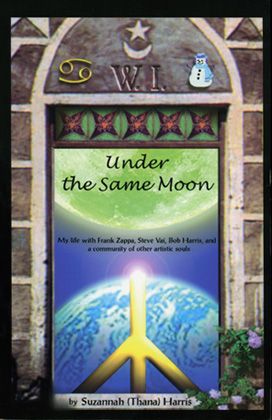 Under The Same Moon


Suzannah (Thana) Harris, former vocalist for Frank Zappa and Steve Vai, moved at the age of thirteen from the jungles of Brazil to the seductive and turbulent environment of the late 1960's in the U.S.


This first-hand, personal account tells you how Thana, a virtually unknown vocalist, found her way across America and eventually met, worked with and learned from the great musical genius, Frank Zappa, and the world renowned rock & roll guitar player, Steve Vai.


This intriguing story will introduce you to the lady who accomplished what former vocalists could not: the vocal performances on the Frank Zappa recording of "Sleep Dirt". Read about her work and friendship with Steve Vai, her work and romance with Bob Harris (a Zappa band member she fell in love with and married), and finally, life with Steve Vai, Bob Harris, and a number of artists who lived together at the infamous "Wayward Inn", Steve Vai's house in Sylmar, California.


This is Thana's debut as a literary writer.


She speaks directly to you and you'll love her honesty, her humor and her passion for life.


Editorial Reviews
Curio Journal, Australia
“The insights to the working habits of Vai and Zappa alone are worth the price of the book ...


Sevenmag, Australia
“[Thana's] recollections of Frank Zappa in the studio are intriguing and her vocal performances on "Sleep Dirt" are the wonderful result.