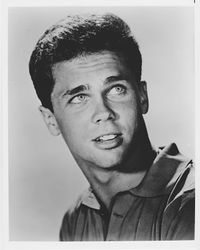 Tony Dow (April 13, 1945) is an American actor, best known for playing Wally Cleaver on the TV sitcom "Leave It To Beaver".

He is depicted on the album cover of We're Only In It For The Money[1], though Schenkel confuses his image with another character from the series, Eddie Haskell (Ken Osmond). As one can see from this publicity shot above it's actually Wally Cleaver.