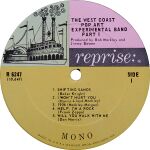 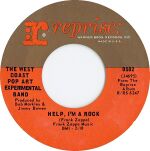 The West Coast Pop Art Experimental Band was formed in Los Angeles in 1965.

There were a few 'psychedelic' groups that never really got to be 'It', but they could still find work and get record deals, including the West Coast Pop Art Experimental Band... The Real Frank Zappa Book

Their first album, Volume One, was released in 1966 by the small local label Fifo. They signed to Reprise in 1967 and recorded their second album confusingly called Part One. This included Zappa's Help, I'm A Rock which was also released as a single. Subsequent albums included Vol. 2 (Breaking Through) and Volume 3: A Child's Guide to Good and Evil. The band broke up around 1969.

Zappa mentions the band when listing Freak Out! Hot Spots.