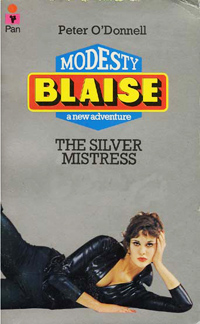 'The Silver Mistress' is one in a series of many, intelligent and entertaining crime-fiction novels by Peter O'Donnell, where the two main characters – Modesty Blaise and Willie Garvin – often challenge each other with fascinating and new knowledge. The following conversation is typical for the novels' style of casual distraction before the adventure leads to action:

'... Trouble was, it was murder getting 'er to bed. Full of guilt and doubt, Doreen was. Spent hours arguing aloud with 'erself about whether she would or wouldn't. I'd sometimes drop off to sleep on the couch listening to 'er.'


'What about the ring?'
'She used to 'ang it on a fine wire, 'old it up over a little table with a cross chalked on the top, so the spike on the ring nearly touched the cross, and ask it questions. It swung one way for yes, and the other way for no.'
'That's not prediction.'
'I know, but Doreen thought it was. She'd ask it about 'er job and 'er love-life and which stuff to use for dry 'air, and what picture to go and see. Everything.'
'And trusted the answers?'
'Like 'oly writ. After the first week I rigged a big magnet on a swivel bar under the table, and I'd sit opposite 'er, working the answers with the magnet.'
She gave a splutter of laughter. 'You mean the should-she shouldn't-she answers?'
'Especially that. Saved 'er a lot of agonizing and guilt.'
'Golden-hearted Willie.'
'They don't make 'em like me any more.'
'Look, let me finish this, then I want to talk about Janet. Why don 't you make yourself comfortable in the sitting room while you 're waiting? There's a new Frank Zappa album[1] on the stereo.'
'I'd rather stay and watch, Princess.'
'All right, but shut up while I concentrate, or I'll make a mess of this.'


He sat contentedly, watehing her move, think, frown, turn, bend, straighten, pour and mix. Her legs were a marvel, he thought without any shred of longing. But most of all he liked looking at the column of her throat, even after so many years there were still moments when he felt amazed that it should be Willie Garvin, gutter-bred roughneck, to whom she had given her total trust and friendship. ... [page 61]