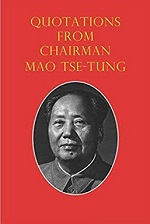 Officially titled Quotations from Chairman Mao Tse-tung, The Little Red Book, so known because of its cover, is a book of statements and quotations from Chinese Communist leader Mao Zedong (December 26, 1893-September 9, 1976) that was first published in January 1964. It has been published in numerous editions and translations all over the world, although sales figures are unreliable.[1]

Frank Zappa used it for an analogy to another favorite target in the "Communism" section in the chapter "Practical Conservatism" in The Real Frank Zappa Book:

"In exporting their philosophy, the Soviets employed a technique reminiscent of U.S. evangelical T.V. ministries. They told people who were sick and hungry that they'd give them food and penicillin. The evangelists forced them to read the Bible; the Communists made them read The Little Red Book - and if you couldn't read, the motherfuckers would recite it to you through a bullhorn."