Refs to FZ's first wife refer to Kay Sherman, as does FZ in TRFZB. So is Kaye Sherman a typo on FO cover or someone else entirely?

I don't know who came up with the idea for a table-based "Versions" section (was it Maroual?) but it's looking very very cool. Kudos! If possible, we should do it like this on all album pages, no? - KillUglyRadio 01:25, 16 Aug 2005 (PDT)

Emdebe recently underlined that we need to cite our sources. I guess this might be a good opportunity in order to gain more credit.

However I also have to underline that:

Surely what we have under Release Notes are Credits for the album. Why do we have (for example) photographer listed at the top of the page while the musicians are buried lower down the page?

Somebody started with this layout (Barry?). I'm not that happy with it either. I would like to see: Tracks / Players / Release Notes / Liner Notes / Background Information / Conceptual Continuity / Versions. --Emdebe 11:19, 15 Apr 2006 (PDT)

Mmmh. I guess the top of the page should focus on synthetic and visual information like the original cover picture, and why not a summary or the musical styles/genre. Emdebe, this new order proposal looks good.
Maroual 14:02, 15 Apr 2006 (PDT)

Cover on the right?

Can we move the cover image to the right and have the text flow down the left like at wikipedia:Freak Out!?

You are completely right, and actually this implies a complete revision of the timings on every page.
Here is what I got (yes, I know I am a bit extremist sometimes):

Looking at the listings at...

Never seen that listed anywhere else.

The picture is very close to the RCOA-33969-C cassette.

Never seen it yet either.

I found a bunch of other 8-track tapes to report, I will do it asap ;)

Table Version - Brilliant! How about a Label hypertext?

Hi Zappurists... this is my first (hopefully contributive) venture into the realms of your excellent site, so please excuse me if I blunder about a bit*.

I happened to be checking through the site discography to see how sadly incomplete my collection was. I personally found the 'Table Version' very informative- it certainly helps visitors to discover/ascertain if they have an original or a re-issue for example, or a US/UK variant. (Simply having an album photo obviously doesn't do this)

As I'm not yet feeling fully competent in tinkering/editing an entry, here's what I'd like to see happening in the Versions section. I'll do it, if someone can hold my hand and enough of you agree...

Example: I have a UK copy of 'Freak Out!'. It's a gatefold cover, double stereo album. The back of the cover indicates 'Verve' logo, followed by 'Marketed by Polydor'. The disc labels are the normal Verve logo style, with a small text addition 'Polydor Records Limited'. Publication date is 1966.

It's been said that if you remember the 60's then you weren't there but, if I remember correctly, I purchased this album in the late 60s - well before the Polydor takeover of Verve.

Am I not correct in thinking that if Polydor issued this in 1972 within the UK then the label would read 'Polydor (logo) - published 1972 under licence to Verve records' or similar? There could be a whole raft of label variants in this Freak Out instance.

What I'm therefore suggesting is a visual aid to Labels/Covers.

Under the Comments column the Edition could be hypertexed to a photo of the cover (in most cases the same cover, but Japanese Edition would pictorially clarify a difference, for example). 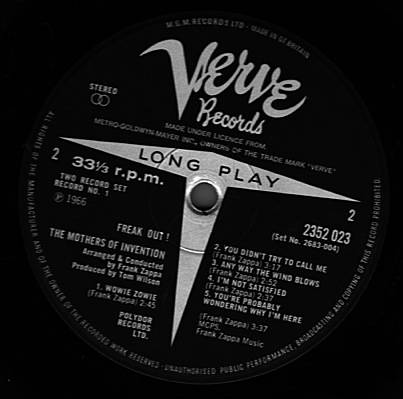 How does it compare to what others have? It's certainly not yelling "Hey we're Polydor and Verve is no more".

To add fuel to the fire, how about a sub-plot click-thru of pressings, where everyone goes through their sets and hands in (what becomes a subsequent thread of) Matrix Numbers from the run-out wax of their copies? A great way to overview the scope of pressings before deletion...? If you're interested, my Freak Out wax is

All the above is probably only of worth to the vinyl period, I don't know how much variation might/did take place in CD centre disc labels.

Finally, my sleeve track list for Side 4 states tableaux 1 is "Ritual Dance of the Child Killer" rather than the plural "...Killers" which appears on the label. (he! he! I found a print error, but which is correct? What did Frank want to call it?). Does this happen on the US/other versions?

Meanwhile, a great site. Congrats to all concerned.

What you have is the 1970's Polydor reissue of the Verve catalogue. The UK 60's (I was there and I do remember them ;-) issue was a single album (VLP or SVLP) with a Garrod & Lofthouse cover with the foldy over bits (is there a name for these - Tabs?) on the outside. Later sleeves were constructed with them folded into the sleeve - look no join. There is a website somewhere that lists all the label variations and matrix numbers - I shall try and track it down.Duncan

Thanks for your help.

The catalog external link to the label picture is indeed a very good idea.

Regarding the different pressings sharing the same catalog numbers, I don't exactly know how to deal with these. It is a complex topic due to the lack of sources. However if you have purchased some records when they were initially released then your help is more than precious.

Sometimes I feel like moving the matrix numbers somewhere else because it makes the table uneasy to read. And a single cell is certainly too small in the case of many different matrix numbers.

Feel free to make very long comments, I enjoyed your post very much.

This discussion is not over as IMO I have not completeley answered ;-)

Civilized Chart Phase 2.... How about doing something like this?:

2) The Edition then shown in the box (ie US Edition) could be highlighted when a picture of it is available (or any info is available).

3) Clicking on this link would take you to a NEW PAGE (I'll call it X for now) showing a US Edition 1st cover photo, plus any Comments regarding later versions, subtle print changes, stickers et al. This page could be shared by the CD version to keep things minimal in management terms.

4) Catalogue Nos would also be repeated below this cover photo & highlighted for the reason below:

5) (Back to the Catalogue box in the chart) When the Cat No is entered it can be highlighted when a Label picture is available. (which it will be if you've got a cover).

Thus, when either Cat No is clicked (in the Chart Cat box, pardon the pun, or on the new X page) it takes you to another NEW PAGE (I'll appropriately call it Z for now) showing ORIGINAL Label.

Below this label can go the Matrix for it. (which you've got if you've got a label).

6) Thus, anyone with a US Edition, same cover, DIFFERENT label can start to run a thread below the original label, including matrix.

7) Both Page X and Page Z can have a footer-list of Country Editions as click-thrus to save going back to the chart to get another Country's cover or label.

8) The core of what I'm suggesting means that what you've got doesn't change, only matrices get deleted, and visitors don't have to go through any new radical learning experience. Also, if you're not geeky about covers & labels and just need the facts you don't need to go behind the scenes. Your existing chart has done its job.

If you can do this then I think the 'different pressings' aspect will possibly begin to solve itself. Perhaps I was a bit rash in suggesting having every pressing number known to man. We just need to know what the number looks like, whether a number got changed 'cos the pressing plant/record company went bust or whatever. This is just a text thread thing that Them Out There Who Are Interested will take up...

I think it would now be helpful to the reader to explain the reason for highlighted Catalogue Numbers & what they will give you.

A single explanatory line of text just above the Freak Out! Version chart? Something like "Catalogue Numbers that are highlighted will take you to a photo-reference of the Center Label" (and any available variants?)??

I can now see my UK version & your UK version have text differences below the RPM area & the Cat No area. I'm Freaking Out already!

I've noticed various errata on early sleeves. Some of which may help establish 'order of release' in relation to various labels of the release. Still trying to establish what the 'order' is!!

Here's what I've noticed; Early issues, of course, have the "Freak Out Hot Spots" map offer.
However, some have 'child killer' on label, 'child killers' on sleeve.
Some have "(Unfinished Ballet In Two Tableaus)", others "(Unfinished Ballet In Two Tableaux)"
Is one on the "Hot Spot" sleeve & the other on sleeve with the "hot spot" ad deleted?
Is one Canadian, the other US?
Any discovery info here please...
Tonefish 09:26, 11 February 2011 (UTC)