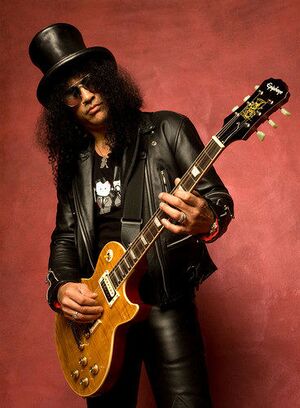 Slash (b. Saul Hudson, London, England, July 23, 1965) is an American rock guitarist, best known for his work in the band Guns 'N' Roses.

"I like Frank Zappa a lot, but I can't say that he was much of an influence on my guitar playing. But as an orchestrator, lyricist and overall personality, he had a huge overall influence. Also, I love classical music. It has left a major mark on my playing." - Slash [1].

Slash was also interviewed in the documentary Cry Baby:The Pedal that Rocks the World.