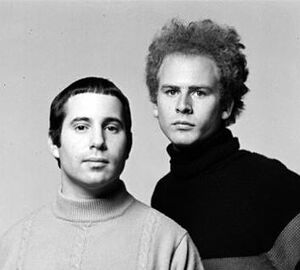 American folk duo Simon & Garfunkel first recorded together as thirteen year olds using the name Tom & Jerry (borrowed from the cartoon cat and mouse). They had a hit in 1957 with "Hey, Schoolgirl".

In 1967 Zappa met Paul Simon in Manny's Music Store in New York. Simon invited him to dinner at his home. Art Garfunkel also attended and he and Simon told Zappa how much they missed performing.

"Well, I can understand your desire to experience the joys of touring once again, and so I'll make you this offer. . . we're playing in Buffalo tomorrow night. Why don't you guys come up there and open for us as Tom & Jerry? I won't tell anybody. Just get your stuff and go out there and sing 'Hey, Schoolgirl in the Second Row' -- just play only your old stuff, no Simon & Garfunkel tunes." They loved the idea and said they would do it.

During the encore at the May 2, 1967 concert in Buffalo, NY, Zappa re-introduced them as Simon & Garfunkel and they performed "The Sounds Of Silence".