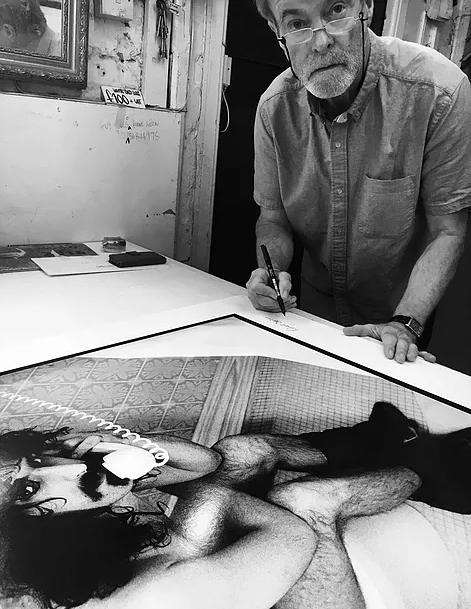 Robert Davidson is a British photographer, best known for taking the infamous photograph of Frank Zappa sitting on a toilet (1967).

While Davidson had made some exclusive photos of Zappa on that fateful day his original commission fell through, so he wouldn't be paid. He decided to make one of this photos into a poster, designed by Des Dale. Eventually one photo was used in International Times issue 18 August- 13 September 1967.[1] The Toilet Poster became a best-seller, but Zappa wasn't pleased with this, particularly since he didn't earn profits from it. A deal was made that he would received 20% of the innings, but unbeknownst to Davidson this money wasn't paid to him. Soon after Davidson was threatened by some local gangsters to hand all the negatives, prints and plates to hem. He did and never earned anything from the photograph since. [2]Davidson learned that they were in possession of Zappa's manager Herb Cohen. Nevertheless, by then the photographs were already bootlegged into infinity, so Zappa and Cohen didn't earn much from them. [3] [4]

In March 2015 Cohen died. Around that time Davidson was emailed by Javier Marcote, as Spanish Zappa fan, who told him the negatives of the photograph would be sold online. Davidson contacted the new owners, who were willing to give them back to him for a small financial recontribution. Since then the rights are back in Davidson's hands.

Davidson has announced an upcoming book about his life and career: I Shot Frank Zappa. [5]