Punky Meadows (February 6, 1950) is an American guitarist known for his glam rock image as a member of the band Angel. 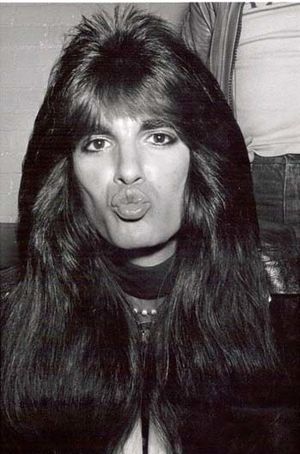 The pooched-out succulence of his insolent pouting rictus

Drummer Terry Bozzio was fascinated by a photograph of Meadows which showed the singer pouting his lips to the camera. This became a running gag during the tour and Zappa wrote an entire song about Bozzio's homo-erotic obsession with Meadows: Punky's Whips. Meadows is also referenced in Titties 'n Beer.

The song was also the reason why Warner Brothers refused to put the track on the album during its first release. The members of Angel objected against the song, even though Meadows himself was amused and flattered by the song. Meadows even went on stage with Zappa one time to perform the song dressed in his Angel outfit.