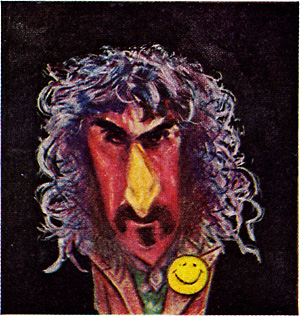 
The dairy cows of 18th Century Weimar disturbed the German poet Goethe at least as much as the turkey farms of Palmdale, California, bothered Frank Zappa in the Fifties. Yet, in spite of all the cow dung in the street, Goethe managed to write Faust, whereas Zappa for the life of him can't seem to get the turkey shit out of his head. And the latest live double album Roxy & Elsewhere (DiscReet) strongly indicates that the mother of invention is not about to clean house. Take the orchestral suite consisting of Village Of The Sun, Echidna's Arf (Of You) and Don't You Ever Wash That Thing? The trite lyrics of Village are so obviously geared to sell the purely instrumental sections of the composition to his audience of juvenile enfants terribles that the sales pitch needlessly commercializes and discredits the music itself. As do the lyrics of Penguin In Bondage, Son Of Orange County and Pygmy Twylyte. On the other hand, Cheepnis is a truly hilarious oratorio about TV science-fiction monsters that shows real insight into media psychology. Yet by side three, Zappa's artistic credibility is so low, even devoted fans must doubt whether the song contains anything more than the usual anti-establishment kitsch. Perhaps the most exasperating cut is Be-Bop Tango, where, stepping out of his maestro role and into his master-of-ceremonies personality, Zappa interrupts George Duke's fine scat singing to ... hold a dance contest! How long, O Lord, how long must we dial Frank Zappa and keep getting Bert Parks?