A new "singing group", the Mothers of Invention, have recently released their first album, entitled "Friek Out." [sic]


They needn't have bothered. With voices that should put an alley cat on a fence at midnight to shame, these "mothers" have wasted two records and an album cover of indescribibly [sic] poor taste recording 80 minutes of pure trash.


If the recording, which fits its title beautifully, has a hidden message for its listeners (if anyone with any sense would even bother to listen), it certainly can't be found in such classic lines as "I don't care if you don't brush you teeth." [sic] Which incidentlly [sic] comes from a jazzy little tune entitled "Wowie Zowie." The cover explains that this song is "to suck the 12-year-old-listener into our camp." The 12-year-old-listener would be better off playing in the streets.


One entire side of the album is devoted to a series of noises that sound like a herd of half-slaughtered cattle under the classic title, "The Return of the Son of Monster Magnet."


This horror is obviously a satire of today's longmopped singing groups, but is has failed. It is in a class by itself – if it can be classified.


A second article from the Los Angeles Herlad-Examiner, also by Bob Levinson, appeared in 1964. This article was later reproduced in the 9 September 1966 issue (Vol. 3, No. 36, Issue 112) of the Los Angeles Free Press as part of a paid advertising supplement entitled "Freak Out! The Official News Of The Mothers". 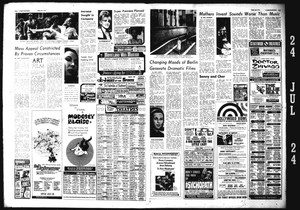 They call themselves the Mothers of Invention. Consensus, a form of Group Confucius, has it that this alone will set Necessity back a few years.

The Mothers advocate a form of music currently alien to all except members of the United Mutations of Los Angeles, whose congregation is a delicatessen on Fairfax Avenue.

"If you think I'm weird, you should see some of them," Frank Zappa advised, interrupting his dissertation on "Freak Out!" to conquer another piece of peach pie and sip coffee.

Frank is the Head Mother, the group's leader, musical director, composer, arranger, spokesman, and style-setter. He is skinny-tall, an emaciated John Carradine, and wears his hair long. A goatee lurks defiantly under his lower lip.

On this day he was wearing a collarless white shirt, candy-striped pants, and tennis sneakers – no socks. It was a warm day.

The Head Mother does not go unnoticed, and people were prone to stare now. He was eating and orating at a sidewalk table on the Sunset Strip.

"I don't believe pornography exlsts," Zappa said. "If pornography doesn't exist, how can it be there, in my music?"

He carved out another piece of pie and sneered at this interpretation of the 58:05 minutes of sound that constitutes "Freak Out," the remote Verve album that also has been classified as vulgar, ridiculous, a dangerous influence, and several un-nice things as well.

"Our whole bag is outrage," he explained. "That's it. The only way you can fight for survival is with outrage, because someone is going to outrage you right back.

"Each song in our album is an abstraction of certain trends in pop music. I tried to make it as gross as possible, so that somewhere along the line someone could say, "That's really gross."

"Even when it's supposedly serious, the whole thing is a satire. It satirizes all those groups that cut stuff that oozes. It's satirizing every puker rock-and-roll group and all that teenage nonsense with oversimplified lyrics, ooh-wah, falsetto, and mumbling business."

Two long-play records contain a plethora of sounds and styles and titles such as "Hungry Freaks, Daddy," "Who Are The Brain Police?," "Wowie Zowie," "Help, I'm A Rock," and "The Return Of The Son Of Monster Magnet.

The last runs 12:17 minutes and includes one section subtitled "Ritual Dance of the Child Killer." The composition is incomplete, but Verve needed something for Side 4, Frank declared.

Inside the album are photographs of the Mothers (Ray Collins, Jim Black, Roy Estrada, and Elliot Ingber), some of the Mothers' little helpers and United Mutation [sic] members as well as reading matter authored by Zappa, much of it relevant to the music.

One part explains that to "freak out" is to practise free expression on an individual or collective basis. The Mothers do it on their records and, one infers, the delicatessen delegation on their rye bread.

Those who obtain the album may do it by discarding the records and playing the cover.

"This is a rough beginning," the Head Mother said. "Whether or not I believe, I was meant to do it."