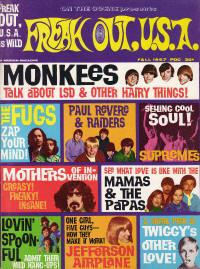 
At least, that's the way he looks. That's the way he is being merchandized to the record-buying public. And that's his image. Kooky. Like he's on a trip. Freaking-out. All the rest.


There are surprises in store, readers. Big. Unexpected.


I interviewed Frank Zappa recently. After being warned. Told that he was, well, different, unusual, non-conforming. And he was. Every bit of the way. From the hair and beard to the clothes he wore.


To say the least.


Appearances are deceiving. Not that one could consider Frank Zappa "normal." He isn't. And a good thing that's true!


"We don't endorse any drugs," he said calmly, sincerely, his tone matter of fact, "or artificial means that would do anything to change the consciousness of a single individual."


"But your image is psychedelic," I pointed out.


"Psychedelic is a very handy word," he retorted, "a convenient label. It's not something we apply to ourselves – but an impression fostered by a group of greedy business willing to equate non-conformity with some LSD jargon and manner. The two don't, in themselves, go together. They can or they may not. In our case, it's the latter."


"Why do you think the use of LSD has increased so rapidly in our society?" I asked.


"I do not believe we have a society," Frank replied. "What we have is a colony of animals. I don't believe there are any human beings around. We merely fantasize that we have reached the human level of achievement. The Bomb, war, prejudice are, however, only products of sub-humans.


"I am trying to use the weapons of a disoriented and unhappy society against itself. The Mothers of Invention are designed to come in the back door and kill you while you're sleeping.


"One of our main, short-range objectives is to do away with the top-40 broadcasting format because it is basically wrong, unethical and unmusical. Sure, we're satirists, and we are out to satirize everything. Most of the guys in this band feel that we're going to do something to help."


Frank's definition of "freaking-out" further reinforced my suspicion that he might have a brain beneath all the hair.


"It's a process whereby an individual casts off outmoded; and restricting standards of thinking, dress and social etiquette in order to express creatively his relationship to his immediate environment and the social structure as a whole."


Few groups are born with more planning, though The Mothers of Invention certainly seem like a freaky, spur-of-the-moment bunch.


"We were carefully hatched in the best tradition of American business," he said, "programmed to do a specific job and we have been quite successful thus far. We are aiming for the consumer group, people who have certain hang-ups that can be expressed and worked out in song. It doesn't matter if our music makes sense. If people want a pile of rubbish, we're going to give just that to them!"


Frank Zappa contends, "Society, and I use that label loosely, can't be healthy without art. America stifles art. Little is created unless it serves a commercialistic need, i.e., jingles for a Pepsi-Cola announcement. Ours is a materialistic, mechanistic age. It's confused, topsy-turvy and erratic. If current art seems to possess similar qualities, that's to be taken for granted. Art at its best always is projecting what is happening at the time it is made."


Not everybody would enjoy an interview with Frank Zappa. As I said before, he looks weird. Offbeat. Way-out. And he is – in the sense that true non-conformity, daring creative thinking and pure, frank honesty are rare, offbeat, and so on.


Not everybody would like Frank Zappa or The Mothers of Invention.


But you know something?