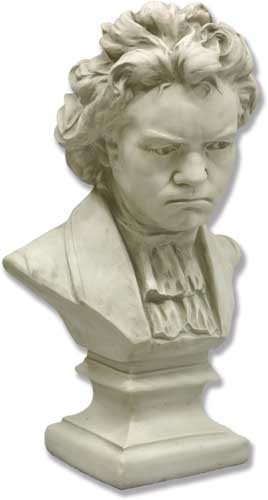 
Ludwig van Beethoven (Bonn, December 16, 1770 – Vienna, March 26, 1827) was a German composer and virtuoso pianist. He was an important figure in the transitional period between the Classical and Romantic eras in Western classical music, and remains one of the most famous and influential composers of all time.

Born in Bonn, Germany, he moved to Vienna, Austria, in his early twenties and settled there, studying with Joseph Haydn and quickly gaining a reputation as a virtuoso pianist. Beethoven's hearing gradually deteriorated beginning in his twenties, yet he continued to compose masterpieces, and to conduct and perform, even after he was completely deaf. He is most famous for his Eroica, Pathétique Sonata, Moonlight Sonata, Fidelio, Missa Solemnis, 5th Pianoconcerto, aka "Emperor", 5th Symphony, 6th Symphony aka "Pastorale" and Ninth Symphony, aka "Ode to Peace".

Ludwig van Beethoven is pictured on the cover of We're Only In It For The Money between Zappa's legs, but only as a substitute for Edgar Varèse, whose bust could not be found.

Beethoven's "Mondschein Sonate" ("Moonlight Sonata") is referenced during the track This Ain't CNN.