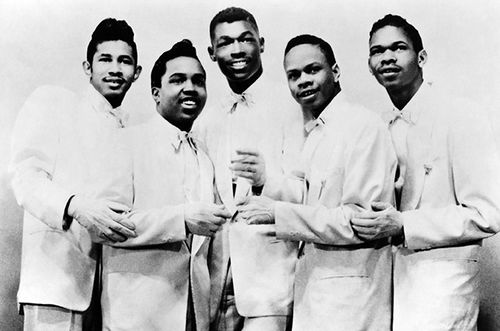 Zappa about Lee Andrews & The Hearts

"Then there's another song called "The Girl Around The Corner" which is the other side of "Teardrops" by Lee Andrews & The Hearts and the lyrics to that are just incomprehensible, it's something like: 'Butchy Stover makes love like Casanova, she fucked him five times in the eye, three times in the knee, Buddha McCrey, She's crazy that way'. And then there's a sax solo in the middle of it and he's honking away sort of inanely and then this one guy starts to sing too soon and then he stops and then it's time to come back in. It's a great record. Really far out!" - Frank Zappa Interview By Barry Miles, International Times, 29 August 1969.

"One of the strangest, if not the strangest record of all time wasn't a one-shot, but came out on the other side of "Teardrops" by Lee Andrews & the Hearts. "Teardrops," a love song, was the big hit and "The Girl Around the Corner" was passed over, but it's fantastic. It's the most abstract lyric I've ever heard – highly stylized. It has to do with a girl named Buddha Macrae and a guy named Butchie Stover who "makes love like a Casanova." This guy is telling about some chick around the corner and how far out she is, and he succeeds, while all the time, someone in the background is going "Bum Bum Dee-Rahcha." I still can't figure it out, it's insane. And if I ever met this Buddha Macrae chick, I'd uh ... I don't think I could handle it." - Fifties Teenagers And Fifties Rock, Richard Blackburn, Evergreen Review, August 1970.