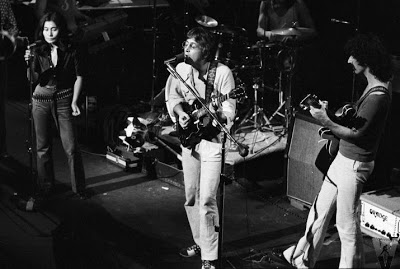 Zappa met Lennon and Yoko Ono in 1971 and performed with them on stage. After a while Ono started screaming throughout Lennon's performance, so two of Zappa's band members put a bag over her head while she kept singing. This track eventually ended up on Playground Psychotics (1992), where it was named A Small Eternity With Yoko Ono.

In the LP sleeve of the 200 Motels Martin Lickert can be seen wearing a shirt that reads Yoko Ono. [2]

Yoko Ono is one of the people receiving thanks for their "very special but no less significant contributions" in The Yellow Shark liner notes. [3] She and John Lennon were also mentioned and thanked in the liner notes of The MOFO Project/Object (2006) album. [4]

"We come from more or less the same background, the classical avant-garde, though in our work we expressed ourselves quite differently. As a composer, I felt a close comradeship to him amongst more rock orientated singer/songwriters. He is one of the geniuses of our time and will always have a place there. He will go on and on and on!"[5] - Yoko Ono, reflecting on Zappa's 70th anniversary on December 21, 2010.