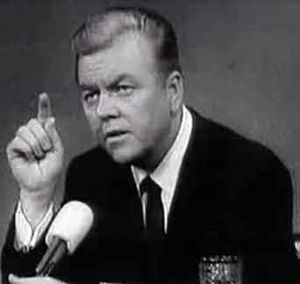 Joe Pyne (December 22, 1925- March 23, 1970) was an American radio presenter and a prototypical version of what would become known as Shock Jocks. He had developed his confrontational style since his early radio shows in the late 1940s. He would often start an interview with an insult to wrong foot his guests. On October 22, 1966 [1] Zappa, along with a bunch of LA freaks and the Cherry Sisters, appeared on the show. According to legend Pyne tried to insult Zappa by making a comment about his long hair, which went: "So I guess your long hair makes you a woman." Zappa then supposedly quipped back: "So, I guess your wooden leg makes you a table!", referring to the fact that Pyne had lost a leg while serving with the U.S Marines during World War II.

Although the opening parry is well known no recording of this particular show has surfaced until now.