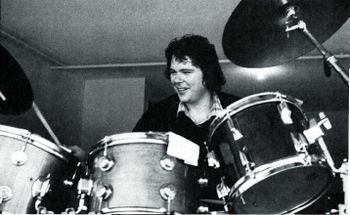 Jim Gordon (Born James Beck Gordon, 1945, Los Angeles, California) is an American songwriter, drummer and criminal. As a member of Derek and the Dominoes, he is probably best known for co-writing Layla with Eric Clapton.

Jim Gordon was a drummer for Zappa's bands on albums like The Grand Wazoo, Apostrophe ('), Läther, Imaginary Diseases and Wazoo. He was a popular session drummer, which resulted in the popularity and quality of the Grand and Petit Wazoo tours.

Legend has it that Gordon was busted for cocaine possession right before the Grand Wazoo Band went on stage (FZ quickly replaced him with the drummer from the other band [drummer & band unknown]). Gordon reputedly paid off the Police Department with $20,000 and the incident was forgotten. In 1983 he was convicted for killing his mother by means of repeated blows with a hammer - believing she was some sort of 'demon' trying to get him. He served a 16-year sentence in Atascadero State Hospital (ASH) and remains incarcerated in the State Medical Corrections Facility in Vacaville.

A possible obscure connection to this incident in the lyrics of 1984's Thing-Fish is a matter of conjecture: