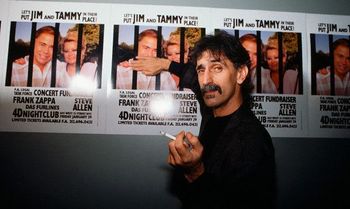 Zappa in 1988, posing next to posters to promote an anti-Bakker benefit concert.

Jim Bakker (January 2, 1940) is an American televangelist who was married to Tammy Faye Bakker (1942-2007) from 1961-1992. In the 1980s Bakker was convicted of massive tax fraud, mail fraud and one count of conspiracy. He was sentenced to 45 years in federal prison in 1988, but in 1992 his jail time was reduced to just 8 years. In 1994 Bakker was paroled, after serving almost five years of his sentence. Since then he returned to his former profession.

Zappa frequently satirized the Bakkers in his songs, including Jim & Tammy's Upper Room, Jesus Thinks You're A Jerk and in some live versions of Louie Louie Zappa sang "Jim and Tammy: you gotta go!" On 29 January 1988 he and Steve Allen organized a F.A. legal task force concert fundraiser, under the title: Let's Put Jim and Tammy In Their Place.

Rob Samler: "What did you think about the sentence that Jimbo [Bakker] got?"

Rob Samler: "Well, one day they'll all get caught."

Frank Zappa: "Well, no, not really, because I don't see that she broke any law, I mean, I can't say that I have any affection for Tammy Faye, but she wasn't the financial brains of the institution. Basically, he was being sent to jail for doing a criminal act, not because he was, y'know ... ."

Frank Zappa: "Yeah, I mean, I don't see any proof that Tammy Faye stole anybody's money. If she had, then she oughta go, but ..."

Rob Samler: "Yeah, well, she sorta lived the lifestyle off of it, though."

Frank Zappa: "Yeah, but I don't know whether that's against the law, see? I think that it would have been pushing the case to bring her in as an accomplice. I think they made a stronger case by aiming it at him, because he was actually the boss of the operation. I think that ..."