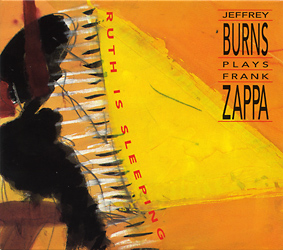 "I met Frank Zappa in October 1991. The Academy of the Arts in Berlin was planning to present his new compositions in Germany and I wanted to ask him if he had written any piano music which I could play on this occasion. In Zappa's living room we listened to each other's latest recordings. His newest works were composed on and performed by his computer, as their complexity rendered them very difficult to be written down and played by live musicians. He gave me the score of the piano piece, 'Ruth Is Sleeping', which had been written some years before but had not yet been performed. Its simultaneous use of different registers of the piano to achieve multiple combinations of major sevenths made it a interesting challenge to me. I also found that Zappa, by not indicating any dynamics or tempo changes, stimulated the performer to improvise the interpretation, as it were, evoking sometimes dreamy, sometimes tempestuous moments of Ruth's sleep. I performed the piece in Berlin on September 21, 1992."