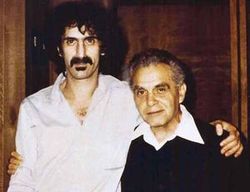 Kirby and Zappa were good friends. Kirby often came over to visit Zappa at his home. Both shared the same kind of humor, disdain for the government and a love for tobacco. Ahmet Zappa claimed: “My dad loved comics and was the first to advertise rock ‘n’ roll in comics, for ‘We're Only In It For The Money’ [in Fantastic Four #72, 1968, Natch!]. (...) One of the most significant moments in my life is when my dad said, ‘Meet Jack, he’s the guy who created all those superheroes you love.’That blew my little mind. I thought it was awesome and weird that my dad had this friendship with this guy. It was like meeting like a real magician!” In an interview Ahmet claimed that Kirby always brought comic books with him for Ahmet. He also recalled that Kirby felt that the film "Star Wars" was just a rip-off of his stories and that Zappa then told him he was asked to write music for the film, but turned the offer down because he wasn't interested.

Sgt. Fury, one of Kirby's best known characters is depicted on the cover of We're Only In It For The Money, next to Lenny Bruce on the middle left side of the crowd, underneath the thunder cloud.