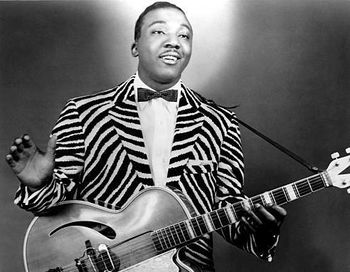 In 2011 he was inducted in the Blues Hall of Fame.

During the KPPC, Pasadena radio show, when Zappa was guest DJ, he played four songs by Lenoir: "Mama, Talk To Your Daughter", "The Eisenhower Blues", "Mama, Your Daughter Is Gonna Miss Me" and "I'm In Korea".

Zappa about Trouble Every Day:

One of the things that it derives from is there has been a tradition in blues lyrics to tell social stories. A lot of people in the pop music world are unfamiliar with the world of folk music or the world of blues lyrics. I had grown up listening to blues records, so that kind of form wasn't unfamiliar [to me]. But the things that were being spoken about in the folk songs and the blues records were not generally major news stories. There was a guy named J.B. Lenoir who had a couple of songs, "The Eisenhower Blues" and "I Am In Korea." If you can ever find those records and listen to those things they were made in the early 50's. That would be some of the roots the Watts riots songs would come from. Maybe it was unique for a white person's rock and roll to stick something like that in it, but in other musical forms that kind of style had existed to a degree.[1]