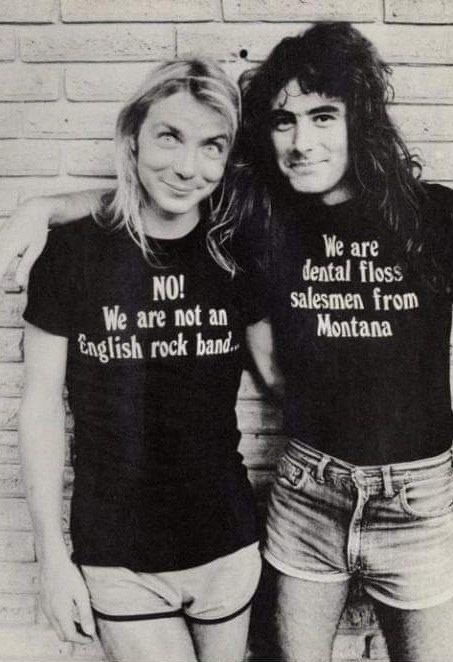 Dave Murray and Steve Harris wearing Montana shirts, from the sleeve of their album The Number Of The Beast, 1982.

In the sleeve of their album The Number Of The Beast (1982) CD there's a picture of guitarists Steve Harris and guitarist Dave Murray, who wear T-shirts reading: "NO! We are not an English rock band... we are dental floss salesmen from Montana!"

On 9 April 1982 Steve Newton interviewed drummer Clive Burr on earofnewt.com and asked him which musical artists the band members listen to in their spare time. Burr answered: "Dave is into Deep Purple and Hendrix, and Adrian likes listening to that sort of music as well. Bruce is a Rainbow man, and Steve is into UFO, Judas Priest, and Todd Rundgren. My favourite is Frank Zappa. He’s God as far as I’m concerned." [1]