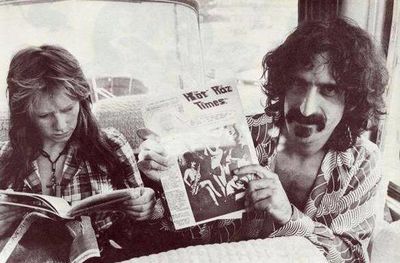 Frank Zappa in July 1973, seating next to Australian journalist Jennifer Jewel Brown, holding a copy of the first volume of Hot Raz Times.

Hot Raz Times was a 1973-1974 German- and English-language Frank Zappa fanzine, edited by Urban Gwerder in Zürich, Switzerland. Gwerder hand-crafted each issue with loads of unsorted and unsortable photo collages and interviews.

One of the features in the magazine was the Zark Radar, where everything "Zappa" was detected and monitored.