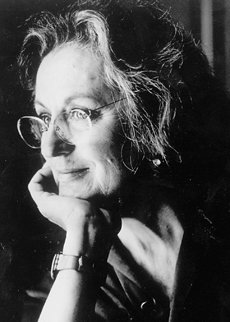 Germaine Greer (January 29, 1939) is an Australian writer, academic, journalist, scholar and one of the most famous feminists in the world. She is best known for her book "The Female Eunuch" (1970).

Greer first met Zappa in 1973, over breakfast in the coffee shop of the Beverly Wilshire hotel, where Frank and Gail stayed while their house in Laurel Canyon was redecorated. Greer had just heard that her boyfriend had pubic lice and was worried she might have got the same condition. As she sat there in her sadness Zappa and his wife asked her what was wrong and she explained the situation. Zappa then gave her a ride to a drugstore where he bought blue lotion for her.

She wrote an obituary dedicated to Zappa in "The Guardian" on December 13, 1993, Frank was the Real Thing living in a Nightmare.

On April 14, 2005 Greer wrote another article about Zappa for "The Guardian", Frank Zappa's Treasure House, and revealed that she wanted "G-Spot Tornado" to be played at her funeral. [1]

On October 7, 2006 Greer presented a special on BBC Radio 4 celebrating the 40th anniversary of Freak Out!. [2]

Germaine Greer is also mentioned and thanked in the liner notes of The MOFO Project/Object (2006) album. [3]