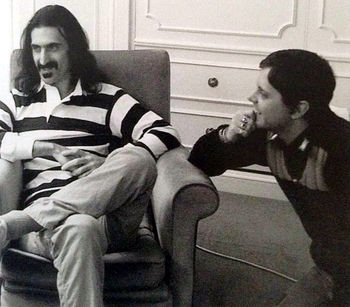 "After I dropped out of university in 1969 and moved to Islington to be in the Exploding Galaxy, around the corner were the Third Ear Band. I used to hang out with them and play violin with them too, just sort of jam. Later on I heard Jean-Luc Ponty with Frank Zappa. I still often take the violin with me on tour, in case I want to play it, it's kind of a talisman for me. I can't imagine not having a violin there... I still play it with Throbbing Gristle." [1]

Genesis Breyer P-Orridge: "Ohh, I’m really happy with the new album. I really, really am. I think that "Hell is Invisible"… in a way, for me, encapsulates all the things I wanted Psychic TV to be from the very beginning. And I think it’s probably the most perfect album I have ever done. (...) I think it’s just got all the aspects that I’ve always played with and investigated. Cut-ups, and symphonic structures, strange edits like Frank Zappa and Lumpy Gravy. Sort of otherworldly film music, landscapes and ironic psychedelic stories and parables. I really think it’s the best thing I have ever done. I really do. I think my singing is better than ever." [2]