Frank Zappa and the And (Paul Carr) 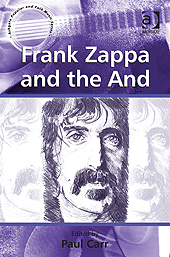 Zappa and the And - Book cover

This collection of essays, documented by an international and interdisciplinary array of scholars, represents the first academically focused volume exploring the creative idiolect of Frank Zappa. Several of the authors are known for contributing significantly to areas such as popular music, cultural, and translation studies, with expertise and interests ranging from musicology to poetics. The publication presents the reader with an understanding of the ontological depth of Zappa's legacy by relating the artist and his texts to a range of cultural, social, technological and musicological factors, as encapsulated in the book's title - Frank Zappa and the And. Zappa's interface with religion, horror, death, movies, modernism, satire, freaks, technology, resistance, censorship and the avant-garde are brought together analytically for the first time, and approached non chronologically, something that strongly complies with the non linear perspective of time Zappa highlights in both his autobiography and recordings. The book employs a variety of analytical approaches, ranging from literary and performance theory, 'horrality' and musicology, to post modern and textually determined readings, and serves as a unique and invaluable guide to Zappa's legacy and creative force.