Frank Zappa, Captain Beefheart And the Secret History of Maximalism 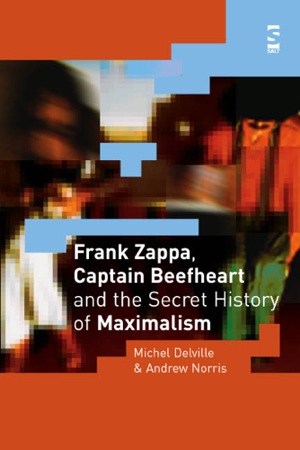 "A comparative account of the musical and cultural acts of Zappa and his cohort, collaborator and antagonist Captain Beefheart. Written in the iconoclastic spirit of Zappa’s art, this book traces the mixed media experiments of California freakdom through the dada blues of Beefheart, mapping out the pleasures of imaginative excess".

(An extract from the book):

When Frank Zappa and Don Van Vliet sat around after school eating pineapple buns (from the remains of Mr Vliet senior’s bread round) and listening to rhythm and blues records, they were indulging in an early form of maximalist synaesthesia, performing the basic tenets of an aesthetic philosophy and way of life which was, at various points throughout the next thirty years, to unite and divide their parallel careers as American maverick artists: Buns and blues, the listening body eating, this was an auspicious beginning.

Van Vliet was one of Zappa’s earliest and most significant collaborators who eagerly assisted in the forging of links between discourses of bodily experience and music–making; along with Motorhead Sherwood and Ray Collins, he was a key figure in the conversion of teenage gross–out humour into an expanding aesthetic of the body’s parts and processes. Zappa’s account of the origin of the name “Captain Beefheart” captures the atmosphere of those formative years and illustrates how so much of what we analyse below can be traced back to the lewd anecdote or obscene gesture:

Captain Beefheart was a character I invented for the film [“Captain Beefheart Versus the Grunt People”]. His name derives from one of Don Vliet’s relatives who looked like Harry Truman. He used to piss with the door open when Don’s girlfriend walked by and make comments about how his whizzer looked just like a beef heart.

The vortex of Zappa’s maximalism is a toilet, and here we see him seizing on a creative détournement of the human body: the penis becomes a heart, a conflation of two organs of love — the literal and the symbolic are fused together in an anthropomorphic leap of imagination curiously prophetic of Van Vliet’s later pictorial style with its Wellsian miscegenations. Artistic experiment is already inseparable from research into what the body can do physically, how it behaves socially, and how it can be manipulated aesthetically.

Van Vliet finally abandoned music for painting in 1982, and Captain Beefheart was no more. His recording career was characterised by an intermittent striving for an innovative rock–blues–jazz–avant–gardiste–mélange which would sing back to us in crazy voices from beyond the beat...