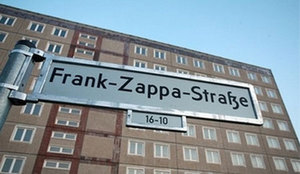 In July 28, 2007 a street, in a light industrial area 10 Km / 6.5 Miles east of the centre of Berlin, formerly known as "Straße 13", was renamed Frank-Zappa-Straße. The move to rename the street was initiated in 2005 by ORWOhaus a musicians collective and rehearsal space located on the street in a former photographic film plant.

There was a concert on July 28th 2007 with 17 local bands to celebrate the name change. The Zappa Family Trust objected to the involvement of the Arf Society with Gail Zappa threatening to sue the organisers.