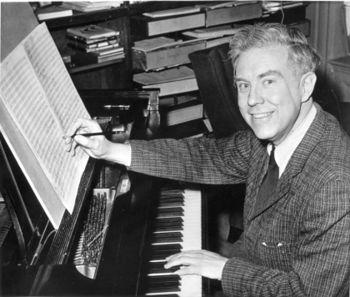 Elliott Carter (December 11, 1908 - 5 November 2012) was an American composer. He started off writing neoclassical music, before moving into a more atonal, rhythmically complex musical direction. He is probably best known for his five "String Quartets".

In a 1975 radio interview Zappa expressed his admiration for some compositions by Carter:

"The most recent record that I heard and impressed me was Double Concerto for Piano and Harpsichord and Two Chamber Orchestras by Elliott Carter. I did a radio interview in Boston, about three or four days ago and I found this record. It's a Nonesuch album and it's really good, just go get it. Found this record sitting in their bin and I was going: "What is this album doing here, you know? Most have got shipped to the station by mistake." And so I snatched it out of the bin and the whole concept of what I was doing on the show was: the disc jockey told the audience that he was going down to city hall to hear some speeches about the Red Sox. And that he was turning the station over to this disc jockey and Frank Zappa and I was: "I just play what I like", but actually he was still sitting there running the turn tables and I was running my mouth. So I grabbed this thing and put it on. I said: "We are going to try to make this record a hit in Boston." And we kept playing it, and playing it and playing it, you know, and just saying: "All the calls are coming in and the record stores can't keep it in stock. And then we played the flip side which was a duo for violin and piano. Just gave it this horrible hype (...) But people were people calling the station asking where they could find it? And it's a great record, but it's not the kind of thing that anybody is going to play on the radio." When the interviewer expressed her admiration, Zappa advised her to buy and play the record, because "Elliott Carter needs some exposure." He also told her that Carter really wrote some "neat stuff", especially his "String Quartets" and praised the record label Nonesuch for still taking a risk in producing and releasing these albums. '[1].

Elliott Carter was also mentioned and thanked in the liner notes of The MOFO Project/Object (2006) album. [2]