Does This Mother Know Best? 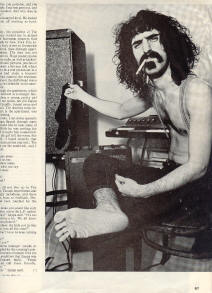 The vice president talked about the growing market for musical instruments. We were crossing a railroad siding. "Fifteen million amateur musicians between four and twenty-one," he said, as we entered the plant. His words were momentarily lost in the echoing spaces. "... over nine hundred million dollars ... these automatic lifts alone can ... projections of next year's teen-age market are fantastic ..."

"Yes," I said, feeling depressed. Nothing tires me more than other people's money. "Could we see these new instruments?"

"Of course," Mr. Mersky said, "but you'd like to meet our Mr. Hack first?" Mr. Mersky opened a door.

An executive office. The thick rugs, the upholstered furniture, the conference table. At the head of the table, sitting all alone at that vast mahogany prairie, was a smiling, middle-aged man in a gray suit. He had turned his swivel chair around to face the only two other people – men? boys? – in the room. They were lying on the rug.

It was clear that they had carefully, with great artistry, deliberation and the utmost contempt, constructed of themselves everything that the businessman at the conference table would find most objectionable; they were the standard figures of protest of our time. The first one had long, thick ringlets of hair hanging down below his shoulders, plus an evil, black-pointed beard and heavy moustache. He was wearing skinny Yale 1912 football pants with no padding or color, and a child's sweatshirt that did not come down far enough to cover his bare belly. His shoes were broken at the toes, which, incidentally, peeped out through the crack since he wore no socks. The second figure was similarly decorated, and he seemed sound asleep, his head pillowed on the rug. The man who was awake said, "You should have listened to me, right?"

His finger was pointed at the man behind the conference table, who deprecatingly patted his gray lapels more smoothly into place. He said, "I'm sorry, Frank. Maybe I should have. When I started in this business, everybody wanted clear sounds, beautiful tones, small amplifiers that they could store easily and be easy to carry."

"I'm sorry, Frank," the man at the table said again. He turned to be introduced to me, smiling easily. "Everything's changed suddenly. Maybe I'm an old fuddy-duddy."

The man at the table was Mr. Sidney Hack, president of Unicord, Inc., a company whose retail sales this year will be about $10 million; Unicord itself is a subsidiary of Gulf & Western, a business colossus that owns – besides Unicord – Paramount Pictures, New Jersey Zinc, Desilu, etc., etc. The speaker on the floor was Frank Zappa, a Mother, the chief Mother, as a matter of fact, of a rock group called The Mothers of Invention. In addition to being a musician, he is also president of The Nifty Advertising Agency, which Unicord, Inc. employs to reach the vast, new and golden – youth market.

"Frank is our new corporate image," said Mr. Mersky, beaming at the bearded Mother. "He's our own Betty Furness." Zappa politely got up from the floor to shake my hand, and said, "He means that I sold them an advertising campaign in which my photo appears in every ad." "Looking like that?" I asked, with what I trusted was an ironic mildness. Zappa gave me a knowing, wolfish smile that was like the glint of a white knife behind all that face hair. I was fascinated by the way he spoke, which was fluent, articulate and precise; it was hard to believe the words were issuing from that grotesque figure. "What you think is good-looking or not," he said to me, still smiling, "is of no interest to the kids these gentlemen are trying to sell, just as their idea of music is of no interest to that market either. These kids are younger than you are, which does not mean that they are little people. They are different people." "We had a very small radio campaign, only FM," said Mr. Mersky. "If the kids would send in for our catalogue, we'd send them a poster of Frank and The Mothers. We got fourteen thousand requests." Mr. Mersky sounded awed. The man on the floor next to Zappa, who turned out to be Herb Cohen, the vice president of Nifty, and The Mothers' business manager, continued to sleep.

I have since learned that The Mothers of Invention are one of the most awesomely respected underground rock groups. Underground in the true meaning of the word – that is, almost universally censored or refused air time by even the radio stations that proclaim themselves to be champions of the "young" sound. Refusing to change his lyrics, or his attitude, Zappa took the other Mothers – all men, incidentally – to Greenwich Village's Garrick Theatre last year, where he packed them in for six months, six nights a week, at a cool $3.50 per. And after a triumphant European tour last fall. The Mothers repeated their sell-out performances in two pre-Christmas concerts in New York's Town Hall before leaving for a concert tour of the U.S.

Zappa, who is a 26-year-old junior-college dropout from California, writes most of the music for The Mothers. (Their third L.P. is about to be released.) Recently he was commissioned by a major record company to write a ballet. Though he is a self-taught musician, he composed the entire ballet score, orchestrated it for each of the nearly 40 classical and electronic instruments, conducted, supervised the recording session, edited the tapes, designed the L.P. dust jacket and wrote the liner notes. Through his own Nifty Advertising Agency, he will advertise and promote the album – as he does for all The Mothers' albums and appearances. The name of the ballet, incidentally, is Lumpy Gravy.

I asked Zappa about his theories on advertising. "Most music companies," he said, "they hype the kids. Our ads are true. There's nothing wrong with advertising, only with liars." He paused. "I hate liars," he suddenly said, with whispered heat.

Again that charming wolfish smile, almost of complicity. "I dress like this, half because I like it, half because it's my trademark." He paused. The smile gleamed more brightly. "And mostly to put you on." I liked him better.

"Come on," he said, "I'll show you the kind of amplifiers they used to make here."

He led us in a procession down a corridor and into a factory. I felt as if we were in Alice in Wonderland, some child's dream of heaven where the kids ran the show and the adults had their errors pointed out to them. Mr. Hack, the president, Mr. Mersky, the vice-president, and I tagged along. The business manager was left behind, still asleep.

"When I came here," Zappa said, pointing to an amplifier, "I had to explain to them that kids don't want pretty notes – that's for the flabby, martini-drinking generation. Kids want sound. And if your ears hear it as a whine, a whistle, fuzz-the feedback scream that NBC pays engineers millions to get rid of? That's music to us today. And the kids love it if you hate it. You go to one of their concerts. You want to find out what your daughter is up to. So you go, and you walk in, and you say, 'That damn amp is up so loud I can't make out the words.' The kids love that, because they already know the words, and they know you don't. The amplifier is their weapon of destruction."

Mr. Mersky said, "Be reasonable, Frank. It's not all that bad."

Zappa took a magazine from his back pocket and showed us an advertisement for an amplifier put out by a competitor. It seemed larger than any amp I had seen so far. "Look," he said to Mr. Mersky, "what do they call their machine? And you know how great it sells. Do they call it the Mello-Tone Amplifier? Do they call it the Beauty sound?" He pointed out the name to me. It was called "The Exterminator."

Turning to Mr. Mersky again, Zappa said, "Look. Bernie, you work hard. So Gulf and Western through this company, they pay you a lot of bread. The end of the day you go home, and you lay the bread on your kids. Your son goes out, and uses it to buy the Exterminator. And why does he do that? To blot you out!"

His voice dropped to a honeyed level. He looked at us. "So why are you all working so hard, gentlemen?" he asked.

At the end of the day, the president of The Nifty Advertising Agency invited me to attend one of The Mothers of Invention concerts that night, and we drove back to New York City together. Zappa lives on a leafy street in Greenwich Village, in a basement-level, floor-through apartment in a nice brownstone. The door was not locked, and the lights were on. Huge poster photos of the Beatles were on the walls, as well as tacked up objects, startling words and pictures, patches of brilliant color. In one corner a life-size doll which for a half second I took to be a real person sat in a kitchen chair. Someone had stuck a bayonet through the belly and had painted the resultant wound with red paint. Above the doll's head was a huge poster commanding the beholder to do something pornographic to war.

Zappa showed me through the apartment, which was neat and clean and laid out in a straight line. As we entered the kitchen, a young, pretty girl looked up shyly. She did not speak, nor did Zappa speak to her. She smiled timidly, turned away and began to make a sandwich. The doorless room beyond the kitchen, the last in the apartment, was the office of Nifty Advertising.

Back in the big front room, I sat down opposite the bayoneted doll. Zappa flipped through some albums and asked if I would like to hear some of his music. I said yes. While he was putting the record on, the young girl brought him a sandwich. He took it silently, and the girl left the room. She had not been introduced. (I heard recently that Zappa and the girl have since gotten married.) The music came on while he ate his sandwich, and I caught some of the words:

I ain't got no heart to give away,
I sit and laugh at fools in love.
No angels singing up above today.
Girl, I don't believe in what you say.
... that I would throw away
The groovy life I lead.
For Baby what you got?
It sure ain't what I need.
(I Ain't Got No Heart © 1965 by Third Story Music, Inc.)

The music, or sound, did not live up to The Mothers' advance billing. Though impertinent and rowdy, it was surprisingly melodious, and there were no whistles, whine, buzz or feedback. Perhaps the composer had been touched by the tenderness of the lyric.

"The lyrics you write make you sound like such a hard bastard," I told him, when the L.P. ended.

"The love song is finished," Zappa said. "It's too simpleminded, and therefore a lie. We all know now that love is more complicated."

"What do you think about the kids out in San Francisco who talk about love all the time?"

"If you have it, you don't have to keep talking about it."

"You heard one word yet?"

A little later the business manager (awake at last) came in, and we headed for the evening's concert. As we walked, the business manager told me about the new, powerful amplifiers that Zappa was recommending that Unicord build. "Frank thinks that they should call them, literally, 'Weapons of Destruction."'