Four years after his death Zappa was awarded the Lifetime Achievement Award at 40th annual Grammy awards in 1997.

In a tribute, in the exclusive Grammy Awards program book distributed to the stars and VIPs in attendance, Jello Biafra wrote: 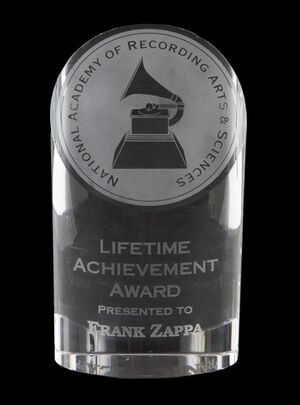 Frank Zappa's first impact on me was in ninth grade. We'd go to a friend's house near school during lunch hour, and roll on the floor laughing at the Mothermania LP on Verve. The all-too-true satire in the grooves gave us strength--it wasn't just OK to be a mutant, it was damn good fun. Terrorizing normal classmates with my very existence was something to be proud of. In high school, I joined the radio club that broadcast music into the cafeteria during lunch hour. Crushed when people didn't dig the obscure sounds we were trying to turn them on to, we started playing music designed to make them mad. Big band records dug out of the store room got a reaction, but not as much as the jocks storming the barred studio windows over Brown Shoes Don't Make It. By then the Zappa fans (we all knew each other) had memorized every word on his albums. For drama class, I directed a stage adaptation of "Billy The Mountain." Due in no small part to Frank, my musical horizons expanded too: the avant-electronics on Freak Out!, jazz and fusion on Hot Rats and Weasels Ripped My Flesh, symphonic forays on Lumpy Gravy and Uncle Meat, and seamless ventures into funk and progressive by the time of Roxy & Elsewhere. All crowned by Frank's fountain of humor. Those album covers! Those titles! When most rock trailblazers were running out of ideas, Frank had more and more. Without touching drugs, no less. In 200 Motels, he called his work "comedy music," but we knew better. I didn't truly grasp what a brilliant production wizard Frank was in the studio until Dead Kennedys' drummer D.H. Peligro played "Apostrophe'" in the van late one night as we crossed the Canadian Rockies in a snowstorm. Here was Frank changing sound and atmospheres every 30 seconds and somehow making it all work-- Phil Spector one minute, Roy Thomas Baker the next. I was floored. When Tipper Gore and her Religious Right pals sat across from their husbands and lied at the '85 Senate anti-music hearings, I couldn't believe it. No one fought back. When Frank finally took them on with his wit and fire and intelligence, it truly showed how out-of-it and spineless the rest of the commercial music industry is to this day. Everything Frank predicted about half-hearted '60s idealists in "We're Only In It For The Money" had come true. People thought I was crazy when I said Tipper and the Washington Stepford Wives were a Trojan Horse for the religious right and were out to bust people. Within weeks, it happened to me. Frank called my house (not the other way around) offering friendship and some very valuable advice, 'Remember: You are the victim. When you fight back, do it with dignity.' About the only silver lining from Dead Kennedys' Frankenchrist album obscenity trial was getting to meet Frank and come to his--well, let's call it a lab. Straight from the "True Cheepnis" monster movies he loved, there were loose wires and bits of equipment in the den, creeping out from under the couch. The Xerox machine was in the shower. A piece of metal collage from the Burnt Weeny Sandwich cover hung from a wall. My generation has not produced anyone the caliber of Frank Zappa. I see no one on the horizon even interested in mastering rock, jazz, classical, studio production, and above all intelligence and humor the way Frank did. Unlike most entertainment icons, he wasn't afraid to keep growing. When Czechoslovakia's Velvet Revolution came, Frank was energized. When he announced his candidacy for president to wake up our country, no one claimed it was to further his own career. Could he have been our Václav Havel? We need something like that in the worst kind of way. More likely it will take all of us, and a few thousand more, if we ever hope to fill Frank's shoes." - A Grammy Salute to Music Legends, David Konjoyan (Editor), 2017, Backbeat, ISBN 9781495045202