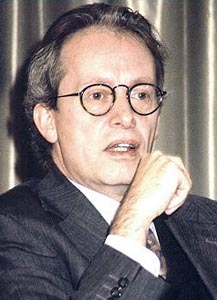 In 1992 he was one of many celebrities who contributed a homage to Zappa in "Guitar Players Presents". "My first reaction was that I couldn't believe it. Five years ago, when I learned that Frank was a composer of serious classical music, I told my partners, "Okay, there's some of these pop stars who try to do this kind of stuff, but I am quite sure that he is just a beginner. I was really surprised when I saw the high quality of compositions like "Mo 'n Herb's Vacation. (...) Like many musicians, I was very interested in the music Frank wrote in the past, but there have been only a very few classical performances of his serious music. Besides, you cannnot compare the music we play with either the rock or classical music he wrote before. It's a completely new thing." - Andreas Mölich-Zebhauser, "Guitar Player Presents", 1992.