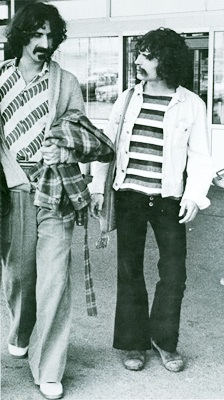 Between 1966 and 1976 he often functioned as the official reporter and touring companion of Zappa whenever he toured continental Europe. He was the publisher of an underground magazine named Hotcha (1968-1971), which published a lot of articles about and interviews with Frank Zappa to the point that it was comparable with an archive. Hotcha also received an English-language edition. In 1973 he also founded a music fanzine named Hot Raz Times.

Gwerder published two books about Zappa, namely Frank Zappa et les Mothers of Invention (with Alain Dister, 1975, Editions Albin Michel) and Alla Zappa. Festschrift (Painting Box Press, 1976). The latter was published as a companion piece to an exhibition about Zappa, combined with concerts by the Mothers of Invention in Zürich that same year. A compilation of his articles and photographs was published in 1998 as Im Zeichen des Magischen Affen, which also came with a bonus CD, Berglers Balz, with an unreleased Zappa track named Eternal Motherly Goodbye Collage. He additionally created an almanac based on Zappa's work.

Zappa provided a shout-out to him during a performance of Sofa at the infamous 1971 concert in Montreux, where a fire broke out (as can be heard on Swiss Cheese/Fire!: "This goes out to Urban Gwerder in the box.". [1]