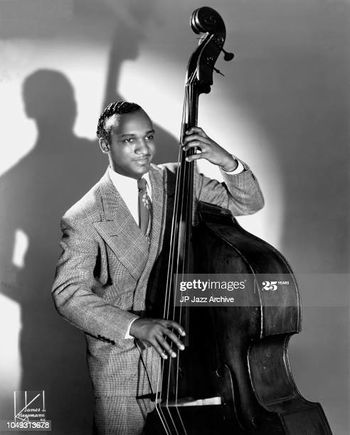 Oscar Pettiford (30 September 1922 - 8 September 1960) was an American jazz composer, double bassist and cellist. He is widely regarded as a pioneer in using the cello as a solo instrument in jazz. Before his solo career he played in Dizzy Gillespie and Duke Ellington's bands.

Musician: Were you ever exposed to some of the jazz that preceded that, like bebop?

Zappa: I didn't hear any bebop until I moved away from San Diego, and moved to Lancaster, and I came across a Charlie Parker album. I didn't like it – because it sounded very tuneless, and it also didn't feel like it had any balls to it. But I did get an Oscar Pettiford album that I thought was good, and I had some Charlie Mingus, albums that I really liked.

Zappa: Definitely had balls. And the Oscar Pettiford record had some weird notes on it, you know, that sounded a little bit more avant-ey.