Zappa was a Master of Ceremonies (with Pierre Lattes) - at the Actuel Festival 24th-28th October 1969. The festival was organised by BYG Actuel, a French record label.

The five day, 24 hour, open air, festival was to be held at the Parc de Saint Cloud in Paris but the French authorities banned the festival a few days before it was due to start. The organisers moved the festival to Amougies in Belgium - a three hour drive east of Paris. Over 15,000 people attended the festival despite the seasonal cold, damp and fog.

"There were this group of people from Paris who put the shit on this festival, mainly because they were scared to death of having large numbers in that city. So these guys who wanted to put the festival on just refused to quit and they finally wound up choosing a cow pasture about two hours out of Brussels.

And then they looked at it and realised that they had to keep on for five days. I was asked to join the festival. They first of all asked for the Mothers to play but there weren't any Mothers at that time, so Pierre Lattes, who I had known for some time, asked me to co-host the festival, but when I arrived there I found that most of the people spoke French and they wouldn't know what the fuck I was talking about so it was useless for me to introduce the groups.

So Pierre suggested that I might play with some of the groups. But I was at a great disadvantage because I didn't have my own guitar and I had to use other people's guitars and the amps that were around for everyone at the festival to use, and they kept blowing up and fucking up, and on top of that some of the groups found it a little difficult to relate to what I was playing. Cause, if you have a group that has certain arrangements and sets that they play every night, it's difficult to stick in an alien element that isn't part of the set up.

The audience and the reviewer forgot about those variables - perhaps seeming a little anxious to prove that I was a crappy guitar player".

-Extract from It's all in self-defence

DS: Alright. Here's a controversy you can settle. There are many people who think that you performed, in 1969, at a festival in Belgium called 'Amougies'...


FZ: Yes
DS: ... performed onstage with Pink Floyd. True or false?
FZ: Not with Pink Floyd.
DS: That's what I thought. You introduced Beefheart to the audience...
FZ: Yes, and I introduced a lot of other acts, too. You see, that was a very weird thing. I was hired to be a master of ceremonies...
DS: Gotcha.
FZ: That was after the Mothers had broken up, and y'know, I had time on my hands. These people contacted me. They offered me ten thousand dollars to be an emcee at a festival, all expenses paid, and go over there, and, y'know, whatever I wanted to do, and I said, "Fine." So, I get there, and they neglected to tell me that nobody spoke English. (laughter) I mean, most of the people there spoke French, and all I could do was point and wave, (laughter) and furthermore, the festival was originally supposed to be in France. The French government stopped it, and so, at the last minute, it was moved across the border into Belgium, into the middle of a turnip patch, in the middle of nowhere, in a tent that was held up by steel girders. This tent held fifteen thousand people. Freezing cold, damp weather, constant fog, the most MISERABLE (laughter) circumstances you could find yourself in, for three days, and it was a twenty-four-hour-a-day festival, and the kids would come there, and they had their sleeping bags, and they were sleeping through ... they were just in this tent FREEZING, laying on the ground, sleeping, while music went on around the clock with all these groups...
DS: How bizarre.
FZ: ... and they were filming it.
DS: A true war story.
RS: So, did you perform with anyone?
DS: Yeah. To nail that down once and for all, you did not perform with Pink Floyd, right?

FZ: No. I think I performed with Aynsley Dunbar, and then, there was a jam session that had Archie Shepp, 'Philly Joe' Jones, and some other jazz guys that played.

-Extract from They're Doing the Interview of the Century, Part 2

Zappa & Caravan at Amougies, an extract from an interview with vocalist/bassist Richard Sinclair;

Interviewer: Do you recall jamming with Frank Zappa?

Sinclair: That was later, at the Actuel Festival in Amougies in Belgium, in a big marquee that held about five thousand people. It was a double, round-ended tent with a big gantry through the middle. The Festival was compered by Pierre Lattes, who was a radio presenter. On the bill were artists like The Nice and Archie Shepp. It was like a whole job lot. I’ve still got the programme. That’s where I first saw Gong. On the day that we played they had The Nice, East Of Eden with Dave Arbus, the violinist who still lives in Canterbury [the town Caravan were from], The Band, and Zappa was there to play with everybody.

Just before the concert got going he spoke to every group that he’d seen doing a quick rehearsal. He just said ‘Hello I’d like to play with you for about ten minutes, have you got a tune that could work with us?’ I think Pye [band member] suggested that we play ‘If I Could Do It All Over Again’. We made it last ten minutes and he played a solo on it. He was quite a small man actually and he looked very stoned indeed, but actually he made a good job with everybody he played with. I remember him climbing onstage with us and it was like someone putting in the handle to start up a vintage car engine. He just wound it up and it was amazing, just incredible. We were just playing a 7/4 figure over a small amount of chords and Dave was rocking it up. It was really good.

The band that played before The Nice, Germ they were called, were like a 15 piece, maybe more, and they did an ‘experimental’ bit of entertainment. Amongst all of this Rock & Roll and Jazz they played one note for thirty minutes and it disturbed the audience so much! They were just going ‘Urrrrrrrrrrrrrrrrrrrrrrr’, all one tone, all of the lot of them. In total contrast to lots of notes and rhythms it was just one note with varying rhythms, droning on and on and the audience just pelted them and made them leave the stage. They pelted them with everything they’d got, cans and everything. The Road Manager of The Nice, Baz Ward, came shooting on stage and turned all the Marshall cabinets the other way so that all the speakers didn’t get broken because all the tins were hitting everything in sight. Then he had to dash off stage and hope the gear would survive. They had to wait until the audience had calmed down and then The Nice came on and everything was OK, but that was one of the highlights. It was like "What IS that?" Bang, Bong etc because they didn’t like one note being played for thirty minutes.

Bootlegs from the festival include Zappa performing with:

Jérôme Laperrousaz and Jean-Noel Roy made a documentary during the festival called Music Power - European Music Revolution. Zappa can be seen playing with Archie Shepp, Captain Beefheart and Pink Floyd. 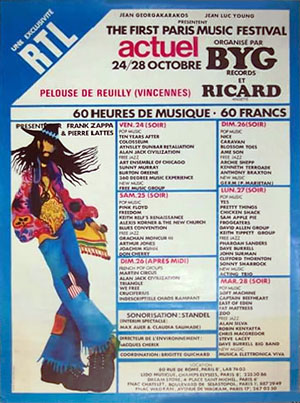 A poster for the First Paris Festival 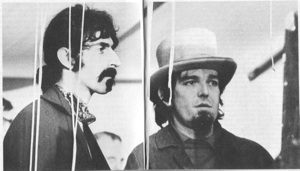 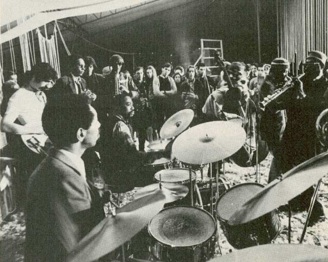