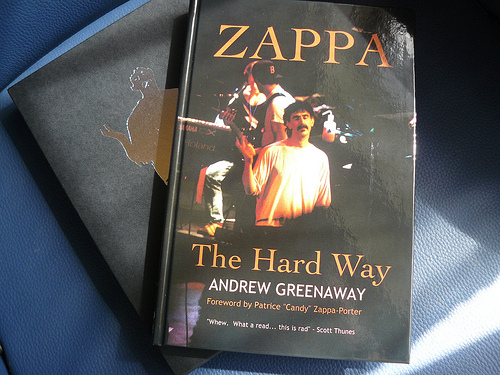 Two editions exist at this time:

Frank Zappa - Genius? Musical dictator? Guitar hero? American dissident? Whatever one's view of the man, there is no denying that he always hired musicians of the highest calibre. Throughout his entire career, the list of musicians that worked with Zappa reads like a who's who of the leading lights of rock and jazz.

From the original Mothers Of Invention through George Duke, Jean-Luc Ponty and Terry Bozzio to Steve Vai and beyond. No matter who was in Zappa's band, high quality musicianship was assured.

In 1988, Zappa toured with a twelve-piece band that had rehearsed for months, learnt a repertoire of over 100 songs and played an entirely different set each night.. It is why, in Zappa's own words, it was "the best band you never heard in your life" - a reference to West Coast American audiences who never got the chance to see this particular touring ensemble.

Taking place in the run-up to an election, Zappa had voter registration booths set up at many of the East Coast venues, and adapted song lyrics to take pot-shots at politicians of all persuasions, as well as the increasingly scandal-ridden TV evangelists. The repertoire was a mixture of Zappa originals, classical favourites and "deranged" versions of songs by The Beatles, Led Zeppelin and many more. Just how many rock bands have ever undertaken such a tour? The Police's Sting joined them on stage at one show, but Zeppelin's Robert Plant walked out in London before he had a chance to hear the band's reggae version of Stairway To Heaven.

Zappa appointed bass player Scott Thunes to rehearse the group in his absence. In carrying out his role, Thunes was apparently abrasive, blunt and rude to the other members and two factions quickly developed: Thunes and stunt guitarist Mike Keneally on the one side, the remaining nine band members on the other. The atmosphere deteriorated as the tour progressed through America and on to Europe.

Before leaving Europe, Zappa told the band that there were ten more weeks of concerts booked in the USA and asked them: "If Scott's in the band, will you do the tour?" With the exception of Keneally, they all said "no". Rather than replace Thunes, Zappa cancelled almost three months of concerts and never toured again - claiming to have lost £400,000 in the process.

Zappa The Hard Way documents that tour. If you think touring can be fun, think again! Yes there were groupies and the usual paraphernalia associated with rock 'n roll, but there was also bitterness and skulduggery on a scale that no one could imagine. Author Andrew Greenaway has interviewed the surviving band members and others associated with the tour to unravel the goings on behind the scenes that drove Zappa to call a halt to proceedings, despite the huge personal financial losses.

Zappa The Hard Way might just be the best book you've never read in your life!