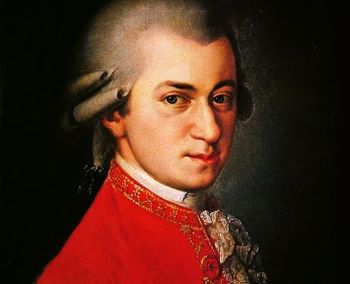 Wolfgang Amadeus Mozart (27 January 1756 - 5 December 1791) was an Austrian composer, widely considered to be a musical genius and one of the most popular and famous composers of all time. He is most famous for his works Eine Kleine Nachtmusik, Die Entführung aus dem Serail, The Marriage of Figaro, Cosi Fan Tutte, Rondo Alla Turca, 25th Symphony, 40th Symphony, 41st Symphony, aka "Jupiter", Don Giovanni, Die Zauberflöte and his Requiem.

Interestingly enough, Mozart, just like Zappa, had a fondness for toilet humour. He often joked about farts and arses in his correspondence and once composed a musical piece called Leck du mich Im Arsch, which translates to Kiss My Ass. [1]

Mozart is also mentioned in This Ain't CNN on Civilization Phaze III.

"In every era there are some composers who have hits, and some who don't. They are both working at the same time. One of them winds up on a candy that you get when you go on an airplane when you come to Austria. The other one: one paragraph on back of a book someplace." - Frank Zappa in a 1984 interview for Austrian television, as quoted in Ein Leben Als Extravaganza - Das Genie Frank Zappa.

"As we got into talking about it, I realized this man knew an enormous lot about Bach, Mozart and the classic tradition." - Daniel Schorr about Zappa, quoted in Frank Zappa, Musician, February 1994.