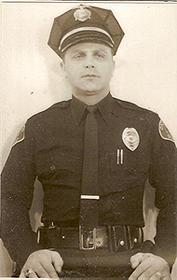 
2 A-Go-Go To Jail
Cucamonga – Vice Squad investigators stilled the tape recorders of a free-swinging, a-go-go film and recording studio here Friday and arrested a self-styled movie producer and his buxom red-haired companion. Booked on suspicion of conspiracy to manufacture pornographic materials and suspicion of sex perversion, both felonies, at county jail were: Frank Vincent Zappa, 24, and Lorraine Belcher, 19, both of the studio address, 8040 N. Archibald Ave.

Rent Movie
The surprise raid came after an undercover officer, following a tip from the Ontario Police Department, entered the rambling, three-room studio on the pretext of wanting to rent a stag movie. Sgt. Jim Willis, vice investigator of the San Bernardino County Sheriff's Office, said the raid suspect, Zappa, offered to do even better - he would film the movie for $300, according to Willis. When Zappa became convinced the detective was "allright", he played a tape recording for him. The recording was for sale and it featured, according to police, Zappa and Miss Belcher in a somewhat "blue" dialogue.

More Enter
Shortly after the sneak sound preview, the suspect's hope for a sale were shattered when two more sheriff's detectives and one from the Ontario Police Department entered and placed the couple under arrest. Zappa, who recently was the subject of news story on his hopes to produce a low-budget fantasy film and thus bring a share of Hollywood's glamour to Cucamonga, blamed financial woes for his latest venture. Inside his studio when the raid came was recording and sound equipment valued at $22,000, according to Zappa.

Musical Instruments
Also, a piano, trap drums, vibraphones and several electric guitars were stored among the Daliian litter of the main studio. On the walls, Zappa had hung such varied memorabilia as divorce papers, a picture of himself on the Steve Allen television show, a threat from the Department of Motor Vehicles to revoke his driver's license, several song publisher's rejection letters and works of "pop" art. Among Zappa's completed musical scores were such titles as "Memories Of El Monte" and "Streets Of Fontana". The latter, written before several utility companies had forsaken the budding composer, opens:


And with the peeling I started to play ..."

Assisting Sgt. Willis in the raid were sheriff's vice investigators Jim Mayfield and Phillip Ponders, and Ontario Detective Stan McCloskey. Arraignment for Zappa and Miss Belcher next week will bring them close to home. Cucamonga Justice Court is right across the street from the studio.
When asked for assistance in this case, the A.C.L.U. replied, "We can't take it, it's not big enough for us."