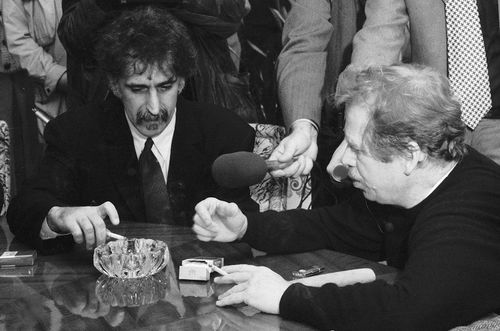 Frank Zappa and Václav Havel during a 1989 meeting.

During the 1960s, 1970s and 1980s Havel's poetry and plays were very political and directed against the communist regime in Czechoslovakia. In 1977 he became internationally well known due to his human rights manifesto "Charter 77", which also led to his imprisonment. In 1989, after the Velvet Revolution Czechoslovakia became a democracy and Havel was elected as its first democratically elected president.

In January 1990 Zappa was invited by Havel, a life long Zappa fan, to become Cultural Ambassador of Czechoslovakia. Zappa sent him several of his albums to complete his record collection. Havel's favourite Zappa album was "Bongo Fury".

Zappa was invited to Czechoslovakia where he was given a hero's welcome. During the communist regime rock music was banned, especially The Velvet Underground, The Rolling Stones and Frank Zappa due to their rebellious nature. Many people bootlegged the albums and were arrested or beaten up if they got caught owning or listening to these records. A Czech underground band called "The Plastic People Of The Universe" was directly inspired by the song Plastic People, which was seen as a revolutionary anthem.

Zappa had many talks with the new Czech government to help promote tourism to the country. Unfortunately Havel was forced to conclude his collaboration with Zappa under pressure of the American government. US Secretary of State James Baker even re-routed a trip through Europe to visit Havel and pressure him into doing business with the United States instead of Zappa.

Václav Havel was mentioned and thanked in the liner notes of The MOFO Project/Object (2006) album. [1]

"Frank Zappa was one of the gods of the Czech underground, I thought of him as a friend. Whenever I feel like escaping from the world of the Presidency, I think of him."