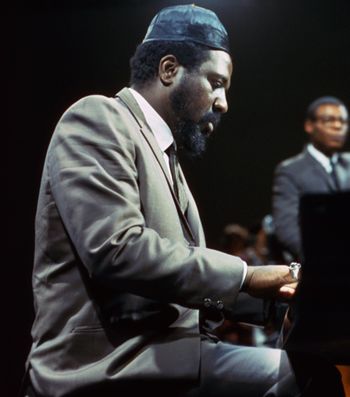 Thelonious Monk (1917-1982) was an American jazz composer and pianist, often regarded as a founder of bebop, even though his style eventually moved away from this style. His compositions and improvisations are full of dissonant harmonies and angular melodic twists, consistent with Monk's unorthodox approach to the piano, which combined a highly percussive attack with abrupt, dramatic use of silences and hesitations.

Monk's most well known compositions were "Epistrophy", "'Round Midnight", "Blue Monk", "Straight, No Chaser" and "Well, You Needn't".

"I think the jazz that succeeds – and for my taste there's not much of it – is not based on the guy's erudition; it's based on balls. Balls operating in that kind of a format. (...) I like Charlie Mingus, and I like Thelonious Monk, Eric Dolphy – I used to really like Harold Land, but I haven't heard anything from him in a long time. But that's about it." (Frank Zappa in Zappa, 79/8)

Zappa quoted "Blue Monk" in The Purple Lagoon on Zappa In New York and "Straight, No Chaser" in Be-Bop Tango on Roxy & Elsewhere and in the guitar solo of Easy Meat on You Can't Do That On Stage Anymore Vol. 5.